October 1, and the unintended consequences – Prelude to Pearl Harbor 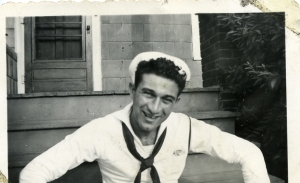 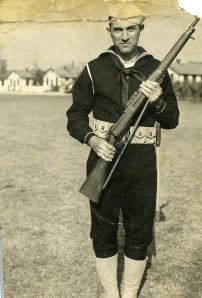 October First was always a remembered day when I was growing  up. On October 1, 1940, Marcus G. Klein (my dad), enlisted in the US Navy, the “old  navy.” As a young boy I would listen with great interest, inspiration and  imagination as Pop would tell stories of his navy in the early days. There was  no UCMJ (Uniform Code  of Military Justice). The disciplinary system then was “Rocks  and Shoals.” Sailors would spend their entire career in the “Asiatic Fleet” or  in a gun mount on a battleship or cruiser, never being transferred anywhere  else. He often said of the Asiatic Fleet Sailors, called “China Sailors,” that once they were a China Sailor, they often never came back but lived out  their lives in the Orient.

Pop enlisted in the Navy to fight the Nazis. Hitler was  killing Jews. Pop’s family was a second generation German Jewish immigrant  family, and he felt it was his duty to join the efforts against Hitler and  Germany. At the time, he was 23 years old and working at Anis Furs in Detroit  Michigan. Upon his graduation from Boot  Camp at Great Lakes, he was not sent to Europe to fight the Nazis, but to  the USS Medusa, which  he described as a Battleship Tender stationed in the Hawaiian Islands…Pearl  Harbor to be exact. His rating was Blacksmith Apprentice at the time.

He met my Mom in Hilo when Medusa was visiting in early  1941, they married in Honolulu by a Justice of the Peace in June that same year,  survived the attack on  Pearl Harbor and two submarine war patrols in the South Pacific…and  in 1949, while still stationed in Pearl, had me. The naval influence in my life  was immediate…I was born in Aiea Naval Hospital in Pearl City…grew  up as a “Navy  Junior,” and graduated from the United States Naval Academy in  1972, followed by 5 years on active duty as a Surface Warfare  Officer. These are some of the unintended consequences of Marcus G. Klein enlisting  to go to fight in Europe on October 1, 1940.

Pop never made it to Europe, and I for one am glad that he  didn’t.