Each year, on June 26, Induction Day, or I-Day for the U.S. Naval Academy Class of 1972,  I send this reminder to my Naval Academy Classmates and Company Mates of the Seventeenth Company…Seventeen, Mighty Mean…How Many Do You Want Sir? Our resolve was being newly formed…

49 years ago today…and counting. It is amazing how fast June 26 now arrives each year! What do you recall of that warm summer day in Annapolis in 1968?

I checked in about 1345 that day so most of you were veterans by the time I got there. Of course the Napsters had at least a day on the rest of us which gave them an incredible head start.  “Don’t salute me, I’m your classmate!” I think I heard Dave Coleman, Jim Walker, or John Sexton mumble a few times that day.

I was delivered to the front door of the LA Area by Steve Grenfell, Class of 71. Steve was a Turnback from the Class of 1969 and son of retired Vice Admiral E.W. Grenfell. Admiral Grenfell was one of my heroes when I was growing up as a Navy Junior in Pearl Harbor and Norfolk. Admiral Grenfell served as both ComSubPac and ComSubLant in the 1950s and 1960s and was my dad’s boss on a number of tours of duty. Whenever the Admiral got a Command, pop would get orders and he would serve on the Admiral’s Staff.

I made my first of many trips over the years, from San Diego to Dulles Airport on June 22, 1968 and Admiral Grenfell was there to pick me up. I spent a few days in the DC/NOVA area. The big politics of the day was the Civil Rights Movement…Resurrection City, and RFK had been recently assassinated, on June 6.

On the morning of June 26, Steve Grenfell, returning with the Class of 1971 in September, drove me to Annapolis from Alexandria. We stopped for a coke at a little place on West Street before Steve delivered me to my date with my destiny.

After I made my way through the check in process in the Library Assembly Area, I was told to stand out in the sun and wait for further instructions; and while I waited, to memorize everything on a card I had been handed when checking in. I studied the card closely and memorized everything on it except a few numbers down in the corner…something called an “alpha code.” Why bother to memorize numbers? They couldn’t be that important! Little did I know that that was my new Unique Identifier.

A second classmen asked me if I had memorized the card and I responded that I had…he then asked me what my “alpha code” was…and it was there, Classmates, that I received my first taste of the temper of the Class of 1970, and how important a few numbers could be. One of the reasons that I wanted to leave San Diego State College (now SDSU), where I attended for a year while waiting to get into the Academy, a school of 30,000 plus students, was that it was a place where I was just a number!

Onward, as I marched up to 3-4 with a group of others (going to different floors/Decks) where my new bald roommates were marking up their new gear…Jack Kennelly and Cliff Kelly. The only rack left was the top one so it looked like that would be home for a while. Across the passageway were Collin Huddleston and John Jarnagin. Five weeks later John would leave and Cliff would move in with Collin…and I would get a bottom rack. For the rest of our stay at USNA, the Jarnagins were family. I still hear from John at Christmas. When we received our class pin, I bought 2. I gave one to my mom, and one to Mrs. Jarnagin. You might remember John’s dad was a retired Navy Commander and they loved the Academy. A few years ago, Mrs. Jarnagin was going through her belongings, found my pin, and sent it back to me for safe keeping. I gave it to Janie.

How did we, as a group, get selected to be together in the same plebe summer platoon and become Seventeenth Company 72? There we were, late in the afternoon in that sweltering Annapolis Summer heat. 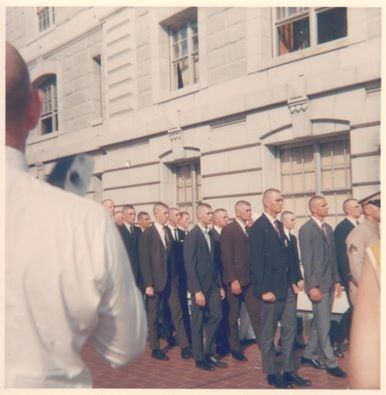 Over 4 years we dropped from about 38 guys to 19 and ended up as a pretty successful group overall. Seventeenth Company 72’ers were tops in academics our last semester, Brigade field ball champs, pretty decent in drill and second or third in Colors. And today as a group we have in our ranks lawyers, PhDs, business executives, and a Four Star Admiral. Who would have thought 49 years ago?!

June 26, 1968 was the beginning of an eventful summer and the introduction to so many new things. Forty Fives, M-1s, memorizing names and rates, iced tea (with no sugar or lemon), uniforms, uniform races, come arounds, accountability, folding laundry, new habits and ways of do things, and friendships that last a lifetime. If I think about specific events, I can actually still feel some of the excitement…

It was quite a culture shock and by the end of that first day, I was ready to go back to San Diego State…except for the fact that if I returned to civilian life I would be Draft Status 1A, and I would be in Nam within a year…so there was a little more incentive to “gut it out.”

And so it began…

It was the beginning of our resolve “ Seventeen,mighty mean…how many do you want, Sir?…I’ll be thinking of you all day Classmates. 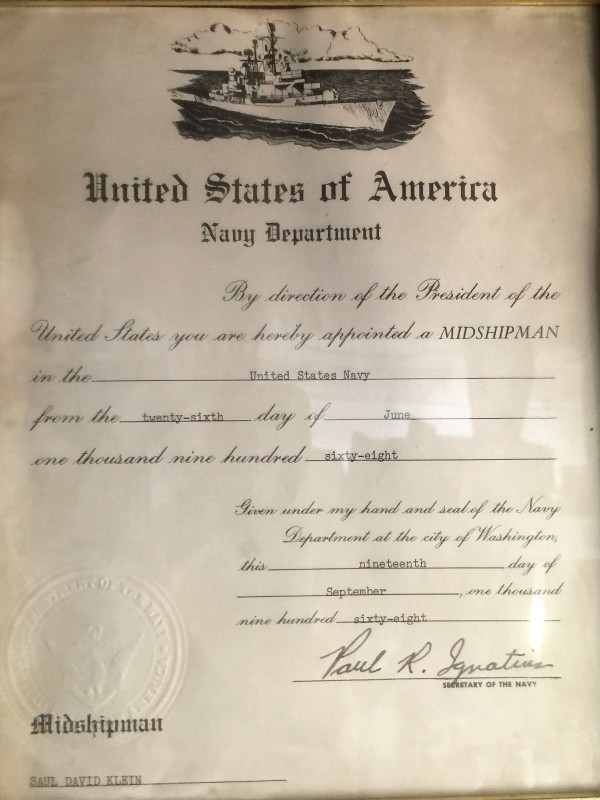